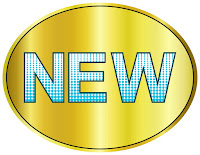 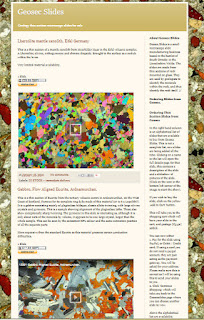 Payment is through Paypal. Credit and debit cards are accepted and it is not necessary to have a paypal account, and there is no need to register with Paypal.
You will be asked for your address as this is required for correct dispatch.

The websites www.geosecslides.co.uk and www.geosec.biz will be retired during the course of 2019. Their contents, as far as possible, will be moved to the new website. This will take some time, there is much to transfer, and the work will have to be done when I am not making slides.
Posted by Rob Gill at 09:38 No comments:

More pages will be added as time allows, currently working on Chlorite and Cordierite.
Posted by Rob Gill at 17:02 No comments:

Email ThisBlogThis!Share to TwitterShare to FacebookShare to Pinterest
Labels: MIA

Email ThisBlogThis!Share to TwitterShare to FacebookShare to Pinterest
Labels: MIA

Apologies for the lack of activity on this blog for the last few months, most of my free time has been spent working on the new Geosec Mineral Identification Assistant (MIA for short).

I have completed pages for the most common minerals, see links below. Less common and accessory minerals pages will follow as time allows. There are many pages still to do, so this project will take quite a while to complete, but I hope it will assist in some small way in identifying what you are looking at when viewing thin section slides through a microscope.


This assistant does not try to be a technical study of minerals, it is a visual guide to enable you to recognize what a certain mineral may be, so you can refer to a more detailed  description in an optical mineralogy text.
The same mineral may look quite different in rocks of varying sources, so viewing as many examples as possible is essential in order to become familiar with the appearance of the mineral. The cost of printing limits the number of photographs in any book or 'atlas', and removable labels or movie clips are not possible. This assistant attempts to do a little more than is possible in printed media.

The Mineral Identification Assistant is free to all, and is has no adverts. It is provided as a service to those who buy slides from Geosec, and is paid for by those sales. It will be maintained and expanded IF:

How to make a "Thin Section"

This post is about how thin section microscope slides are made, but before detailing the techniques used at Geosec it should be noted that there are many different techniques, and no one technique is correct, you just use the method that suits you. It is the finished item that is important, not how you get there.

I have several friends that make thin sections and we have an informal information exchange. We all use different methods, glues, machinery etc, and all produce good slides. I was never taught how to make slides, but found by trial and error a method that suits my requirements. My machines have been constructed in my workshop, and though crude by commercial standards they work well enough, and cost a fraction of the "standard" ones. All my slides are finished by hand, so any inaccuracy that comes from the machines is eliminated anyway.

So, Starting from a piece of rough rock, a small block 2cm x 2cm x 3cm is sawn by hand on a diamond saw. 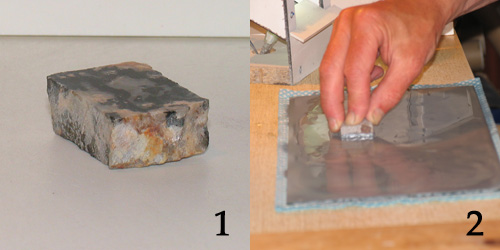 The top surface need to be absolutely flat, so is lapped on a glass plate with fine silicon carbide grit. 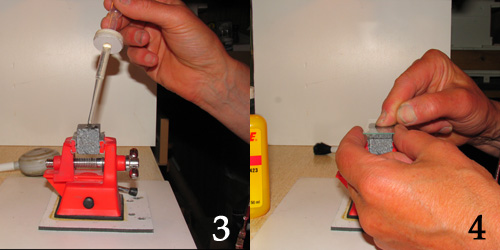 Glue is applied and a microscope slide placed on the block. Any air bubbles in the glue are carefully worked out to the edge. 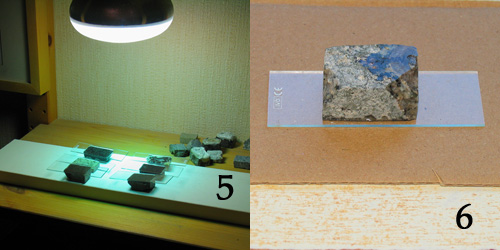 Geosec has moved from the traditional epoxy resin glues to UV setting ones, it is now necessary to put the slide/block under a hi-intensity UVlamp. The glue sets in a few seconds and is now ready to cut. 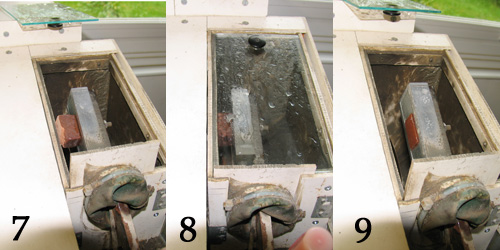 The slide/block is sawn as close to the glass as possible using a thin bladed diamond saw. The section is now 1mm to 0.5mm (500 microns) thick. 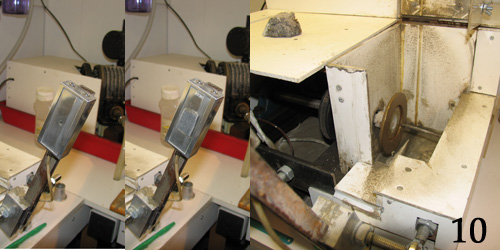 The slide is now mounted on to the first grinding machine. The slide is retained by vacuum in a slide holder and is held against a rotating diamond flat wheel.

The arm reciprocates to ensure even cutting. This machine reduces the thickness to 200 microns. 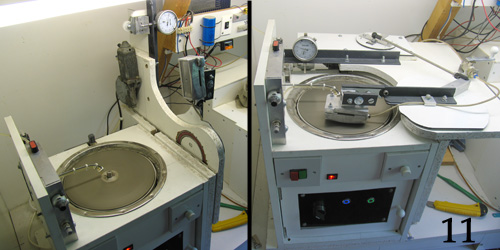 The slide is transfered to the second grinding, or flat lap machine.

Using a finer grade diamond disc this can cut to almost the finished thickness, but there is always some score marks left by the cutting process, so the slides are removed when they are about 50 microns. The slide is now ready for hand finishing. 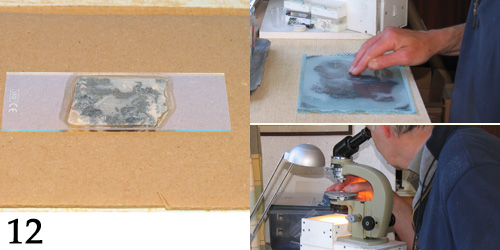 The final stages are done by hand on a glass plate with silicon carbide grit, and repeated checking of the thickness by judging interference colours with the microscope.

Email ThisBlogThis!Share to TwitterShare to FacebookShare to Pinterest
Labels: Business

Here are three pictures that I have been tinkering with to see the limits of what can be achieved with the present camera set up, and to see whether a further investment in additional lenses is necessary.  As before these are zoomable images, click on the

icon, bottom left of the picture to get a larger view which you can zoom in and drag. ( they look good fullscreen, usually available on most browsers by pressing the F11 key)


First image is a volcanic rock from southern Germany known as Limbergite, really an exotic basalt. The bright crystal is titanium rich pyroxene showing differing types of zoning, and also amygdules filled with a radiating zeolite mineral. XPL view. The length of the big pyroxene is 9mm long

Next is from nearer home, from a basalt dyke on the Isle of Skye. Again some radial zeolites, and colourful pyroxenes, curved and branching. A very rarely seen texture. XPL view

Last another volcanic rock, this time from La Palma, the Cumbre Veija volcano. Well known to watchers of disaster documentaries as the potential source of a landslip that may cause a tsunami that could, in turn, devastate the east coast of USA. (Possibly). The rock is known as a phonolite and is silica undersaturated. This gives rise to a rare mineral called Hauyne (pronunced "how-een"), the pale blue mineral with good shapes, and the darkest colour concentrated towards outer edge. Also visible are brown amphibole and green pyroxene, probably aegirine, the whole in a matrix of feldspar laths, grains of magnetite and volcanic glass. PPL view as the hauyne is isotropic and would appear black in XPL.

The experimental nature of these is that these are taken at the highest magnification I can currently achieve with the current camera/lens setup. (no microscope). The first is a single shot, the bottom two are several shots stitched together with varying degrees of success.
Posted by Rob Gill at 21:52 No comments:

Email ThisBlogThis!Share to TwitterShare to FacebookShare to Pinterest
Labels: Geology

A short bit of science.(skip this bit if you want)

The basic difference between a rock and a mineral is that the former is made up of one or more of the latter. Rocks can be infinity variable as the proportions of the minerals vary. Minerals are much more precisely defined, and have a set chemical formula AND crystal structure. Different crystal structure produces a mineral that may be quite different, in colour, shape or other properties, even if chemically identical. These different forms are known as polymorphs
Different polymorphs are formed when the temperature and/or pressure at the time the crystal was formed differs from the 'normal' range.
When a new mineral is discovered the location is given the accolade of Type Locality and is registered in the official texts along with the Mineral Name. Any new discovery of the mineral, anywhere in the world and even if of better quality, is still referenced back to the original name and type locality.
Enough! back to Kilchoan.

Kilchoan is the type locality of not only Kilchoanite, but of two other minerals, Rustumite and Dellaite. see: Mindat for details if you are interested. Not bad when you consider there are only 30 type localities in the whole of Scotland and 110 in the UK (Cornwall has 35)

Kilchoanite is a polymorph of another mineral called Rankinite, itself quite rare, but not as rare as Kilchoanite. All three Kilchoan TL minerals are Calc-silicates, that is they contain Calcium, Silicon and Oxygen. The other two have a small amount of water in their structure, Kilchoanite does not. There are many other calc-silicates, some are of great commercial importance as they form in concrete, so this group has been much studied. Rustumite and Dellaite were discovered in laboratory test of man made substances, but were not know to occur in nature until they were discovered here.

So what is special about Kilchoan? and where can you see Kilchoanite?

The second question is not easy to answer, I have been looking for some time now, and have sent samples to be tested, but with only negative results so far. The site is reported to be on the north side of Glas Bheinn, the hill/ridge to the north of the Kilchoan House Hotel. 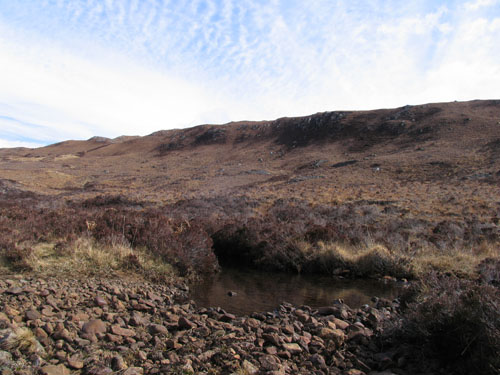 The Kilchoanite started life as a limestone, uplifted and heated by the intrusion that now forms Glas Bheinn. It would not have been at the surface at the time, but subject to considerable heat and pressure. The Glas Bheinn rocks are associated with centre 1, the earliest phase of the Ardnamurchan 'volcano'. Much later centre 3 was intruded nearby, and the limestone (or whatever it was at the time),  was subjected to another bout of heating and pressure, probably at somewhat different levels. This double metamorphism in differing conditions are what caused the unusual minerals to be formed.

So where is it? I thought I had found the location recently 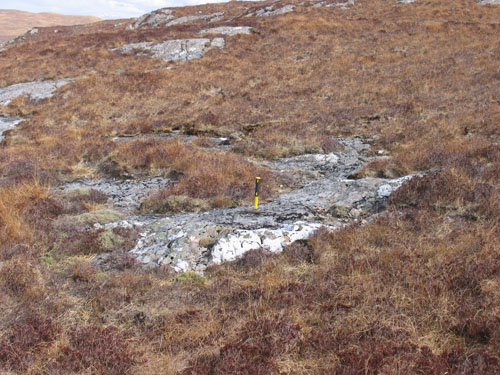 But I was wrong! So I need to revisit the site and check again. How do I know I was wrong? That will be the subject of another blog entry.

Geosec Slides is a small microscope slide manufacturing business based in the hamlet of South Ormsby in the Lincolnshire Wolds. The slides are made from thin sections of rock mounted on glass. They are used by geologists to identify the minerals within the rock, and thus identify the rock itself.